The iMAG 4700 magnetic flow meter is the most economical flange electromagnetic flow meter on the market produced by seametrics instrument . With electrodes designed to discourage fouling,  it is available in 4” to 12” pipe in municipal or industrial water, waste and reclaimed water, pump stations, and packaged plant applications.  (For 3” version, see iMAG 4600-300.) Minimal straight pipe requirements allow. iMAG magnetic flow meters to be used in piping configurations where there is little space between the meter and an elbow.

Water flow meter iMAG 4700  are NSF-61 approved and are rated IP68 for applications where the meter may be operated under water to a depth of at least 10 feet (3 meters) continuously.

The display magmeter iMAG 4700 can be meter mounted or remote, and both rate and total indication are standard. Rate and total units and pulse scaling can be set via the front panel touch key pad by the user. Bidirectional flow is standard with forward, reverse and net flow.

Power/output cable imag water flow meter allows outputs for use with a variety of Seametrics inc USA and other displays and controls for remote reading and telemetry applications. Pulse output is standard on all models and 4-20mA passive current loop is standard on the iMAG 4700p. In addition, 4-20mA loop, HART protocol, high speed digital, and Modbus® protocol outputs are optional on the externally powered units, depending on model. 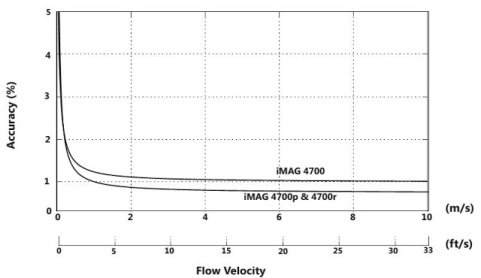 These magnetic flow Meter can be installed horizontally, vertically (with downward flow), or in any radial position. Using a check valve on the upstream side of the meter, and/or an air vent  (vacuum  relief  valve)  in the  same, unobstructed run of pipe as the meter, is required in any installation where the meter may be exposed to suction when the system is not in normal operation. Suction can cause damage to the liner. Liner damage caused by suction, without the use of a check valve and/or air vent, may void the warranty.

The iMAG magnetic flow meter requires straight pipe before and after the meter for best accuracy. However, the ability of electromagnetic meters to average the flow across the entire pipe allows for shorter straight pipe recommendations than most mechanical meters.

A pulse output is standard on all models. Since this is an isolated output, the external equipment must include a DC power source to regenerate the pulse from the open-collector output  (transistor equivalent of a contact closure). A pull-up or pull-down resistor may be needed if not included in the user equipment as shown in the diagrams.

Both the power source and resistor may be supplied internally in some types of control and monitoring magnetic flow meter devices. If not, as for most PLC discrete input modules, they must be added externally at the module input terminals. The pulse output rate in volume units/pulse can be set by the user via the SET P tab on the meter’s setup menus.

The  iMAG  4700 flow meter  can  come  configured  with  two replaceable 3.6V lithium ‘D’ batteries. In this configuration, the only option/output is the scaled pulse output which comes standard. The scaled output for the battery powered option has a maximum pulse rate of 150 pulses/second, with a fixed pulse width of 2.5ms.

Be sure to set your P value such that the meter will function properly over the flow range in your flow meter application. The sample rate of the meter is user selectable through the SAMP tab in the meter’s sub-menu. Sample periods of 1/5, 1/3, 1, 3, 5, 15, 30, and 60 seconds can be selected. Larger sample periods will yield longer battery life but slower response time. Care must be taken to select a sample period that is suitable for your application. See the table below for the expected battery life as a function of sample period